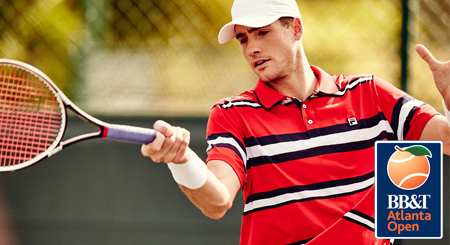 OrthoAtlanta proudly serves as the official orthopaedic and sports medicine provider of the 2016 BB&T Atlanta Open, July 30 – August 7, 2016 at Atlantic Station in Atlanta, GA. OrthoAtlanta shares the excitement of world-class tennis with its own BB&T Atlanta Open Ticket Giveaway from July 1 – 24. Prizes include tickets to the John McEnroe vs. Sergi Bruguera Exhibition Match, the Finals Match and more.

OrthoAtlanta is proud to serve as the official orthopaedic and sports medicine provider of the 2016 BB&T Atlanta Open, an ATP World Tour 250 event that runs Saturday, July 30 through Sunday, August 7 at Atlantic Station, in Midtown Atlanta, Georgia. The BB&T Atlanta Open has welcomed over 250,000 tennis fans to Atlantic Station over the past six years, establishing itself as one of the top ATP tennis events in the US. This year, John McEnroe joins BB&T Atlanta Open’s celebration of the 20th anniversary of the 1996 Atlanta Olympic Games! A seventeen-time Grand Slam Singles and Doubles Champion and U.S. Davis Cup Team player/captain, John McEnroe will play an exhibition match vs. Sergi Bruguera. Throughout the 9-day event, past and current Olympic stars will greet fans. The tournament itself is a mix of young upstarts and former and current ATP World Tour top-20 players.

As the official orthopaedic and sports medicine provider of the BB&T Atlanta Open, OrthoAtlanta physicians serve as the key medical point of contact for the visiting players, coaches and officials during the tournament. Serving as co-Medical Directors of the 2016 BB&T Atlanta Open are OrthoAtlanta orthopaedic surgeons, Snehal C. Dalal, M.D., and Joseph S. Wilkes., M.D. Orthopedic services that are provided by OrthoAtlanta include physical therapy, examinations, non-operative treatments, consultation with the athletes and their coaching staff and referral to outside specialists when necessary.